We know from our own experiences that compared with indoor reared pigs, outdoor born pigs tend to show better performance and health. These are two measurable benefits that we desperately want because of the economic advantages they deliver.

Understanding why outdoor pigs are more robust has proved difficult.

Producers have long argued over the reasons for the difference, with theories due to differences in genetics, nutrition, infection pressure, temperature or sunlight. With 40% of the British herd farrowing outdoors many producers have their own experiences to bring to the argument but whilst they validate the ‘outdoor pigs perform better and are healthier’ argument they are far from finding the real cause.

To try to improve our understanding of the causal effects we embarked on an academic trial from conception to the end of the nursery (at 8 weeks of age).

This trial confirmed pigs born and reared outdoors up to weaning had better performance and health than their indoor contemporaries throughout the nursery.

Our conclusion was, 'It is as if outdoor born pigs are programmed for better performance and health by the outdoor experience in their neonatal period'.

This trial was one of the founding studies for our Accelerator technology as it taught us pigs could be programmed as neonates for lifetime health and performance. In my last article I used some scientific terms (microbiota, metabolomics, immunity) to show the areas of AB Neo's research as we identify the mode of action of our accelerator. The latest revelations are coming from a focus on a new understanding relating to the immune system which is potentially game changing when considering our traditional understanding of the immune system.

The immune system - but not as we know it?

We have all been reared on the sure and certain knowledge that the immune system can be understood to have two parts; The innate part which is general in nature and has no memory and the adaptive part which has a memory (which we exploit through vaccination). Recent research is suggesting that the innate immune can be programmed.

If it can be trained or programmed intelligently in neonates through interactions within the gut then we can reduce a lifetime of lost performance through the chronic activation of the innate immune system which is detrimental to health and general wellbeing of the pig. Our research is investigating how accelerators can influence the billions of neonatal gut microorganisms (the microbiota) to become a more intelligent programming system for the innate immune system.

One fascinating view into how Accelerators might be working has come from work with the neonatal mouse where research has showed gut microbiota can improve immune defences against respiratory disease – a scourge of modern pig production. If there are parallel observations that are true for pigs they would go a long way to explain the lifetime performance and efficiency improvements experienced by accelerated pigs. Exciting and potentially game-changing times. 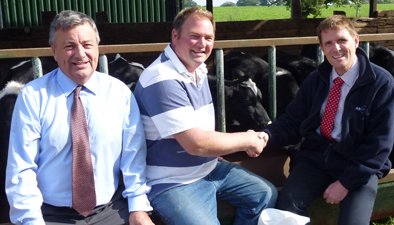